So I dug up my memories from the past 4 years of being a traveling nomad.

There are so many stories enough for me to write a book.

The last two weeks of my RV journey in 2017, I spent at Slab City, known to be the last lawless place in America. It’s located near Salton sea in Niland, California.

Slab City, not governed by any local government, has rules of its own. I have heard a lot about this place but at the same time, not knowing much about it.

At the entrance of Slab City, sits The Salvation Mountain, a mountain hand-made by Leonard Knight. Before he passed, he spent 28 years painting and making this mountain to spread the message of God and Love. Words got out, the reputation of this place grew. Leonard became the most visited man on earth.

Slab City is known for squatters, hippies, snowbirds, calling this place their home.

Yes, this place has an interesting reputation. At first, I wasn’t sure if I should come here by myself. But with some reassurance of women who live there, I had a feeling it was safe for me.

I arrived here in my RV, not knowing where to go. I circled around the city, found a place close to the center to park and spend the night. During the night, I could hear people yelling, dogs barking. I didn’t have a restful night.

I woke up the next morning, decided to find a quieter spot. I drove away from the center, wandering around the city. I was excited to find a piece of land that I thought was perfect for me to camp out and have some peace for myself.

As I was situating my RV to park, my 23-foot home sank into the sand….!

Oh my… the sand is soft, and now my RV is stuck… in the sand!

At this point of my journey, I’ve encountered countless ‘mishaps’, so this accident didn’t shake me as much anymore.

I am out of nowhere in the desert, on a hippie land, the AAA I applied for a few days ago is not yet valid. Having the RV towed would cost a fortune. I thought to myself.. “Ooopsieee! But I’m sure I’ll be fine.” Ha!

Not knowing how to get myself out of this situation, I decided to just continue with my life. After all, I had everything I needed in the RV to survive. No need to panic. I proceeded to make myself coffee and lunch.

After I finished eating, I heard a truck approaching, and a voice shouting “Do you need help?”

The angel has come! I got out of the RV and shouted back “YES!”

Then, I saw an old man, getting out of the truck, with a beer in his hand, his name is George.

George and his buddy accessed my situation and said I had been stuck in the ‘sugar sand’. Sand that appears to be solid but is actually soft. Okay, I learnt something new today. 😉

George asked me to stay put and they would get some help to pull me out of my rut.

After 20 minutes, he showed up with another truck, 3 other guys, 2 shovels and a chain.

Two young guys started shoveling the sand around my tires. Another guy hooked my RV to his truck with the chain. I can’t believe a group of angels have arrived to my rescue.

After about 10 minutes of shoveling, they decided it was ready to pull my RV out with the truck. It took a few tries but eventually… dun dun dun… my RV was out!

George then asked if I wanted a tour of the city. Of course I agreed. He then took me to his hood called “The Ponderosa”.

George has spent his time in Slab City building this beautiful camp. He even converted a few trailers into Airbnb accommodation. People from all over the world could come to get first-hand experience living in this crazy town.

After my rescue, I was sitting around the fire pit at Ponderosa, surrounded by interesting people, talking, laughing, playing music. I was in awe with Life, again.

During my time there, I also gathered up courage to perform at the infamous stage “The Range”. This stage also appeared in the movie “Into The Wild”. In fact, I felt like my whole RV journey was like the movie.

At that time, I had only been really practicing guitar for 2 months or so. I wasn’t ready yet to perform. But I have a habit of overestimating myself sometimes. So I thought I could do it and went for it.

Some of my friends from LA even traveled to come see me on stage.

While I was on the stage looking down, I could see my new friends from the Slab, and my old friends looking at me, cheering for me.

My performance didn’t go well technically, but I was proud that I pulled it off somehow. I had a great time and so did the audience. I promised I would be back again.

After two weeks of staying at Ponderosa, I got the inspiration to fly back to Thailand. I am a sucker for inspiration. So then, I had to say my goodbye to the Slab and to my friends there.

Even though this place has a crazy reputation, I got to see the real Slab City from the inside. How neighbors take care of each other, how much love goes around.

Though I haven’t seen him since I left the Slab, meeting him is something I will remember and the love he gave me will stay in my heart forever. 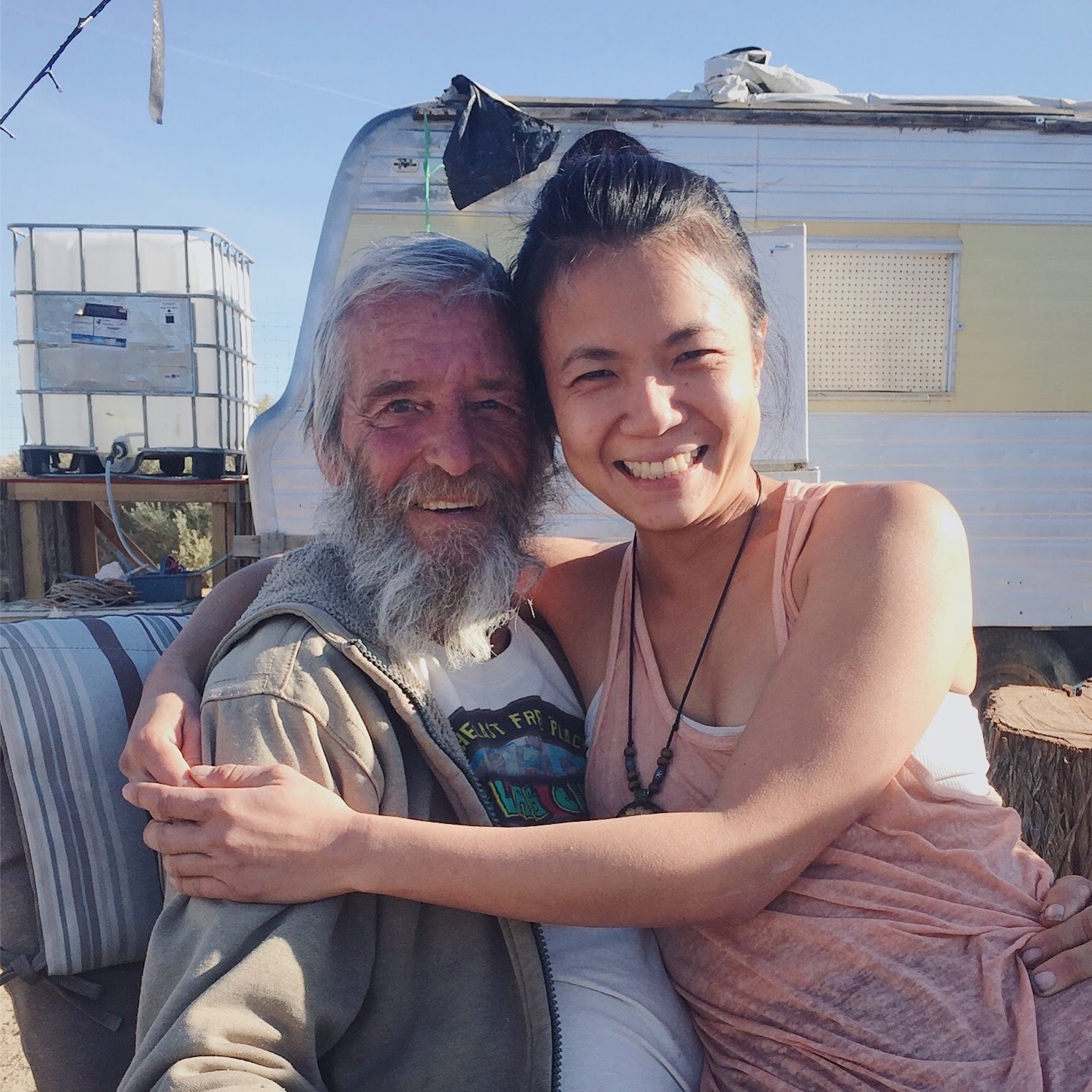 View all posts by Valerie